Moving to London, whether it’s for a new job, to study or just for a change of scenery, is an incredibly exciting time. London is full of things to do from music to food, theatre to nightlife, parks to shopping. The possibilities are endless. Which is why relocating to London can also feel a bit daunting because, hello…Where do you start? There are plenty of great areas to rent in London so in order to narrow them down, consider what you want from your local neighbourhood. Here’s a guide to some of the best areas to live in London, in order to give you the tools to make the right decision for you.

The best areas to live in London – Bloomsbury WC1, Zone 1

Bloomsbury is a prime location in London’s West End. It’s Georgian townhouses epitomise what it means to live in central London. It has great transport links to the rest of the city but with so much to do in the area and most of central London within walking distance, you’ll rarely have a reason to leave.

The area is steeped in culture and history. You can find the British Museum here, as well as the Charles Dickens Museum (to name just a couple in the area). This makes Bloomsbury a rather fitting location for some of central London’s best universities, including UCL and the University of London. Grab a book from one of the many bookshops in the area, then sit down and read in a leafy garden square.

The lively restaurant, cafe and bar scene in Bloomsbury offer a well-earned break from a hard day’s work. Shopping in nearby Oxford Street and Tottenham Court Road is just a stone’s throw away. You’ll also find great eateries within nearby Fitzrovia, Covent Garden and Clerkenwell. Euston, Kings Cross, and Russel Square stations are all within walking distance of Bloomsbury if you fancy exploring more of what London has to offer. 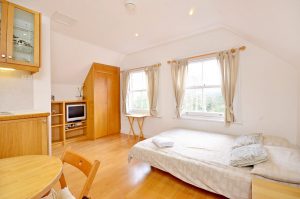 The best areas to live in London – Euston NW1, Zone 1

Euston is a prime location that’s close to both the centre of London and trendy Camden. You can spend your days within the area itself, which is home to Regent’s Park and the British Library. Nearby Charlotte Street is lined with great restaurants that offer a perfect place to sit outside or inside and people watch.

The area is perfect for young professionals and students, with plenty of modern office blocks and universities within walking distance. Euston is also a convenient area to live in if you’re planning to commute to and from work or university. You’ll be minutes away from Euston, Euston Square, Warren Street and King’s Cross stations.

You can also travel a bit further afield to Paris, Lille or Brussels for the weekend from St Pancras Station.

The best areas to live in London – Pimlico SW1V, Zone 1

Pimlico is an upscale residential area located in the City of Westminster. Its streets are lined with beautiful Georgian houses, many of which are actually Grade II listed buildings. Pimlico is quiet and peaceful, with plenty to do both within the area and nearby.

The area is close to the shopping districts of Chelsea, Knightsbridge (where you’ll find Harrods) and High Street Kensington.

You’ll be able to tick off some of London’s most iconic landmarks from your bucket list, with the London Eye and Big Ben just a 15 minute walk away. The Tate London is also nearby on Millbank, as well as Damien Hirst’s Newport Street Gallery which can be found just over Vauxhall Bridge. You don’t have to worry about seeing tourists on your doorstep 24/7 though, because Pimlico is tucked away from these busy areas.

It’s a great location for joggers who can enjoy a waterside run along the Thames Path. Nature enthusiasts will also love the gardens and squares within Pimlico.

Earls Court offers slightly more affordable living within central London than neighbouring areas such as South Kensington. Its streets are lined with brightly coloured houses such as those which can be seen on Wallgrave Road, which offer a delightful stroll on a summer’s evening.

The area is a convenient location to rent privately in London as Earls Court Station offers easy access to anywhere in central London. If you want to stay close to home, then Kensington High Street is a 10 minute walk away for all of your shopping needs. Some of London’s best museums are also only a short walk away, including the Natural History Museum, Science Museum and the V&A.

Fancy a break from all of the hustle and bustle of the city? Then head to Holland Park which has a peaceful Japanese garden and woodland area. You might even spot a peacock whilst out on your morning walk.

The best areas to live in London – Hampstead NW3, Zone 2

Hampstead is famous for its village feel, leafy streets and (in our opinion) one of the best parks in London…If not, the world! Rental property in the area is highly sought-after and comes at a premium. Located in the north London Borough of Camden, Hampstead is a quaint and charming area.

Foodies will love the excellent selection of gastropubs and upmarket restaurants right on their doorstep. Whilst fashionistas will love the independent shopping boutiques.

Hampstead also has plenty of green space. Hampstead Heath offers 320 hectares of greenery and just in case that wasn’t enough, the area boasts numerous picturesque parks including Hampstead Heath and Golders Hill. You can go from the great outdoors right into the city from Hampstead Heath Station. Or look on from afar on Parliament Hill, which offers great views of the city skyline.

Conveniently situated between Shepherd’s Bush, Earl’s Court, Fulham and Hammersmith sits West Kensington. A quiet residential area made up of quintessentially-London Victorian terraced houses, which offer generously-proportioned flats. Rent is also significantly cheaper than the rest of Kensington and Chelsea.

Just a short walk away you’ll find the busier areas of High Street Kensington and Earls Court. West Kensington, Earls Court and Barons Court stations offer great links to the likes of Knightsbridge, Piccadilly Circus and the City of London.

West Kensington is another foodie favourite, with a well-known selection of Asian and Middle Eastern restaurants on North End Road, as well as gastropubs dotted all over the area. If the theatre is your thing, then you’ll love the niche productions staged at Barons Court Theatre. If you’re into live sports, then be sure to catch some of the big-name tennis tournaments at the Queen’s Club.

The best areas to live in London – Hammersmith and Fulham W6, Zone 2

Last, and by no means least, is an area that captures the charm of South West London perfectly. The London Borough of Hammersmith and Fulham is a great area to live, especially if you’re new to the city.

This is because it has something for everyone with great transport links to the rest of the city. From eateries on Fulham Broadway to famous furniture shops on Wandsworth Bridge Road, riverside walks and independent boutiques. You name it, it’s got it. Hammersmith and Parson’s Green stations are also a short 15 minute journey to the City.

What’s more is that Hammersmith and Fulham offers a real community for young professionals. A community which works together to look after its local area, such as the Walled Garden in Ravenscourt Park which has been maintained by volunteers since 2002. It’s also a great place to sit and watch the world go by.

And there we have it. A complete guide to the best areas to live in London. We hope that you found this list useful in narrowing down where to rent a flat in London. Wherever you end up, there’s always something to see and do in London and living centrally in the heart of the action means that you’ll never miss a beat.

At Studios2Let, we manage numerous fully-furnished studio flats in London. All of our studio apartments come with utility bills included, as well as no deposits or agency fees. We most rent studios for professionals and students in London’s most central and desirable areas. If you need any extra information or advice on the best areas to live in London, then please feel free to get in touch and we’ll be glad to help you narrow down the search for your next home.